Kanye West has claimed he lost $2 billion in a single day as companies have continued to sever ties with the rapper following his anti-Semitic remarks.

The rapper, 45, returned to Instagram on Thursday after his account was restricted earlier this month following his series of shocking posts.

Discussing the backlash, West – known legally as Ye – insisted that ‘money is not who I am’ as he penned a ‘love letter’ to Hollywood super agent Ari Emanuel, who had called for West to be dropped by all major brands.

In a post captioned ‘LOVE SPEECH’, he penned: ‘Ari Emanuel, I lost 2 billion dollars in one day and I’m still alive. This is love speech. I still love you. God still loves you. The money is not who I am. The people is who I am.’

In an op-ed for the Financial Times, Endeavor co-CEO Emanuel wrote that there should be ‘no tolerance anywhere for West’s anti-Semitism’ and encouraged brands to full-stop cease partnering and working with the designer.

‘Apple and Spotify, which host West’s music, whoever organizes West’s tours, and Adidas, which collaborates with West on his fashion line, should all stop working with him,’ wrote Emanuel – essentially calling for a blacklisting. 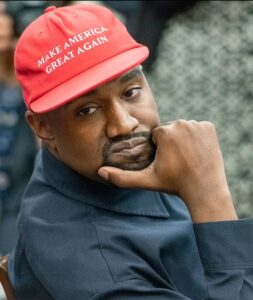 ‘Silence is dangerous,’ continued Emanuel. ‘It allows forms of hatred and racism, including anti-Semitism, to spread and become normalized. It coarsens and degrades our society and country.’

Emanuel, himself Jewish, is widely considered to be one of the most powerful men in the entertainment industry. West has repeatedly blamed the ‘Jewish media’ and ‘Jewish community’ in the music industry for toying with him.

West poked fun at the backlash on Thursday as he posted a fake news headline that read: ‘Ye Has Reportedly Cut Ties With Kanye West,’ adding in the caption: ‘Had to cut ties bro.’

Rapper 50 Cent – real name Curtis Jackson – then posted his own version of the joke, informing the world that ‘Curtis Jackson has reportedly cut ties with 50 Cent.’

He captioned the post: ‘I’m getting rid of anybody who can get me fvcked up like kanye right now ! LOL.’

West then deleted his original post and shared 50 Cent’s meme while requesting they join forces to bring his Donda Academy to Houston, Texas, where 50 Cent resides.

‘We got Donda school designs we need to build with 50 in Houston,’ he penned.

Confusion has reigned at West’s school after the principal said it was closing permanently, only to email parents hours later to say classes would continue.

Reports then emerged that the teachers had quit – following the string of controversial and antisemitic rants its founder has made in recent weeks.

It was not clear how many teachers had quit, and how many remained, but the chaos comes amid an implosion of West’s business empire following his tweets.

Donda Academy, in California’s Simi Valley, is highly secretive, with parents signing a non-disclosure agreement to keep the school’s location secret and agreeing to say nothing about it.

Meanwhile, West’s empire has continued to crumble around his anti-semitic behavior, which has included repeated claims of ‘Jewish people’ in the media conspiring against him, and planned parenthood controlling black populations through genocidal abortions. 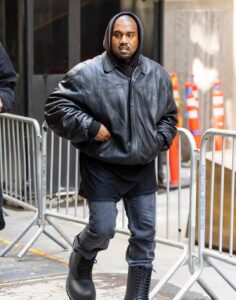 This week Adidas dropped his Yeezy shoe line – a deal which was worth $1.5billion – with Gap, Footlocker, TJ Maxx, and Balenciaga all following suit and cutting ties with the rapper.

The rapper was embarrassingly escorted out of Skechers headquarters on Wednesday after showing up unannounced to pitch his Yeezy brand a day after being dropped by Adidas and having his songs banned by Peloton.

Skechers representatives said in a statement: ‘Considering Ye was engaged in unauthorized filming, two Skechers executives escorted him and his party from the building after a brief conversation. Skechers is not considering and has no intention of working with West.

‘We condemn his recent divisive remarks and do not tolerate anti-Semitism or any other form of hate speech. The Company would like to again stress that West showed up unannounced and uninvited to Skechers corporate offices.’

West may have faced additional opposition if he had gotten a preapproved sit-down meeting with Skechers executives as the CEO Robert Greenberg and current President Michael Greenberg are both Jewish.

The rapper’s removal from the shoe brand’s office comes mere hours after Adidas announced that it will continue to sell Yeezy products while removing the rapper’s moniker.

Management said that they will sell the items under their own brand at the beginning of 2023, according to analysts.

Adidas broke off their deal with Ye on Tuesday after pressure from fans over the rapper and designer’s recent anti-Semitic comments.

It ended the lucrative partnership, which included royalty payments and other fees.

‘I can say anti-Semitic things and Adidas can’t drop me,’ Ye had previously stated.

Since other similar remarks across social media, including a tweet declaring he would go ‘death con 3 On JEWISH PEOPLE,’ Ye has lost a string of high profile partnerships.